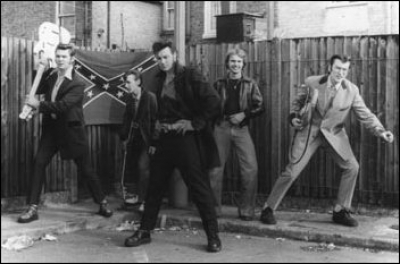 Vernon & The G.I.'s were a Teddy Boy band from the Orpington area of Kent. These recordings are much sought-after. Some appeared as singles on their own label, later to appear with other recordings on the rare Billy Goat label. In 1979, an album was released titled 'GI Bop' (GOAT002).They used to run regular gigs in Orpington, and I often DJ'd at them.

"This band was very popular both in England and the Continent, recording an album and six singles. Now I'm not a great lover of uniforms, but dressed in the G. I. ex-army gear I have to admit that we looked good. One of the songs we recorded called 'Ghost Train Boogie' went to the top of the rock'n'roll charts and stayed there for eight weeks - I'm proud to say this was one of my compositions." Pete Gammon

"After working with a few other bands, I became a founder member of Vernon and the GI's. Like Pete says, the uniform certainly had 'pulling power' - in the early days we wore drapes and creepers on stage! I remained with them until 1978, when I went to live and work in New York. By then several records had been released together with the album 'G.I.Bop'." Tony Casey 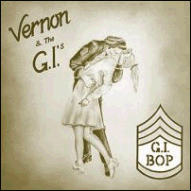 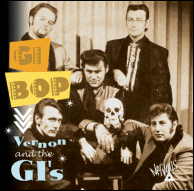