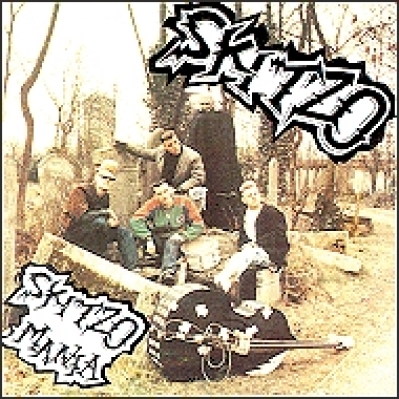 Along with the early Meteors' stuff, Ricochets' 'Made in the shade', Krewmen, Klubfoot compilations and other prominent psychobilly stuff, this album from Skitzo is one of my all-time favourites. It combines 50's rockabilly, 60's garage-punk and horror movies. The sound is just perfect - after all, it WAS recorded in a Psychobilly Psychiatric ward in Skitzoburg, Mentalvania. The cover photo is ultra cool, the band members look ultra cool, the music itself is unforgettable and it was produced by the 'infamous' Paul 'Doc' Stewart and Roy Williams..... bla, bla, bla. I'm psycho for this album. Marko Pecotic

"They say "Never judge a book by its cover", but let's face it, we all do it. So being as frank as I can be, when this CD found its way to me I couldn't get past the circa 1980 punk photo pictured on the back of this disc. Don't get me wrong, I'm not saying that it is a requirement to sport a quiff and side burns to be a kick ass rockabilly band but as we all know it has become quite customary.
This four-piece British rockabilly band is reason number one and prime example of just why you shouldn't judge a book or in this case a CD by its cover. SKITZO rocks!!! I have never heard this band prior to the VERTIGO recording, but believe me, I will be looking to get these greasy fingers on whatever else I can find.
VERTIGO is packed to the hilt with 20 tracks and never comes close to becoming tiresome. In fact I STILL WANT MORE!!!! Enough said." Spyder James