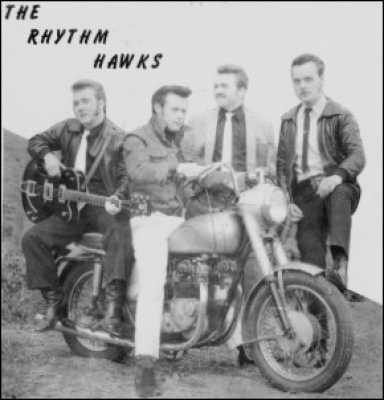 The Rhythm Hawks were a popular British rock'n'roll band from Staffordshire. These recordings date from the late seventies and early eighties when bands like The Stray Cats, Matchbox, The Stargazers and Shakin' Stevens were all over the British charts, and the style and sound of these recordings reflects that. 'Zodiac' was a very popular track in the rockin' clubs at this time. There were two near-identical versions of this song, the one here being the original version, the second one being a single play 45 on the now defunct 'Hot Rock' record label which was owned and operated by David Harris aka Rollin' Rock UK. The Rhythm Hawks were Ken Newbon (lead vocals) Andy Dawson (guitar, backing vocals), Tim Breward (bass, backing vocals), Eddie Lane (sax), Craig Gilligan (sax) T. J. Butters (piano), Kev Massey (stand up bass) and Billy Gibbons (drums). They backed Mac Curtis on a UK tour and formed the nucleus of the musicians who played on one of his latter-day albums.
All of the Rhythms Hawks' vinyl recordings are now extremely collectable, but most of the twenty tracks here have never been made available before. DJ's take note! There are some hot jivers and strollers here! These recordings were all made in Redball Records' studio in Market Drayton, Shropshire between 1979 and 1982.