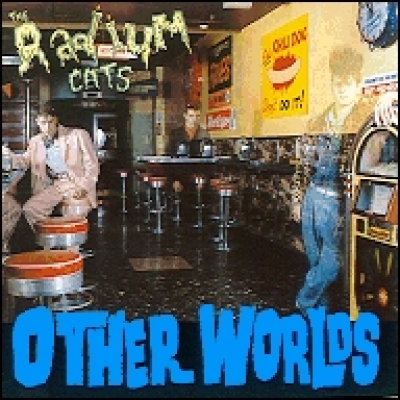 From Scotland - The Radium Cats were a sort of mixture between The Cramps, The Guana Batz, the Stray Cats and The Polecats. I saw them play at one the 'Rumbles' and they were absolutely brilliant. Lee Paterson has since gone on to join Hi Voltage.

" Hailing from Scotland come one of my favorite Psychobilly bands... The Radium Cats. They sadly are no long around and rumor has it that some have relocated to the band 'Hi Voltage'. These guys are absolutely brilliant. If The Polecats and Guana Batz were thrown into a blender, this is the cocktail it would produce. *uckin' amazing! Fans of both Psychobilly and Neo-Rockabilly will appreciate this great release. What else do you expect from the folks at Nervous? If you're looking for a good psychobilly band to give a whirl, you've found it! You can grab this at the Nervous website or at your local psychobilly dealer." Reviewed by The Psycho Avenger 2002

COOL! That's what these cats are: From the tops of their piled high quiffs to the soles of their leopard skin creepers. Rated as the live rockin' band to see, their incredible sound is now available on their first Nervous. release: 'OTHER WORLDS'.
Calling their style voodoo punkabilly, The Radium Cats sound like a mutant hybrid of The Stray Cats and The Cramps. But there's more to their sound than that. These cats bring a fresh and original approach to the music that should see them take a well deserved place as one of the biggest names around. OTHER WORLDS will certainly help them get there - fourteen dynamite tracks, eleven original songs and three inspired covers.
With titles like 'Surfin' D.O.A.' and 'My girl is like uranium', The Radium Cats are second to none when it comes to combining hot rockin' songs with clever, tongue-in-cheek lyrics. They win extra points for Paul Paterson's excellent guitar work - he has got to be one of best on the scone today. Lee Paterson, double bass, and drummer Mark Carr aren't afraid to whip up a storm either. Lead vocals are shared by brothers Lee and Paul.
The Radium Cats were formed about four years ago when they recorded Their mini-album 'Munster Madness'. Various personnel changes followed before the current line-up came together in 1990.
Their influences lie in old 5O's and 60's B-movies, horror comics and sci-fi magazines. They look to acts like Screamin' Jay Hawkins and Charlie Feathers for direction, but their roots go deeper than that, for the Radium Cats are one of the few rare bands to have actually appeared in Transylvania. During the 'Rock for Roumania' tour with other Scottish acts, The Radium Cats played in Cluj, a town in the heart of the 'old country'. You can't get a band with better credentials than that, can you? Original press release

The Radium Cats - Other worlds