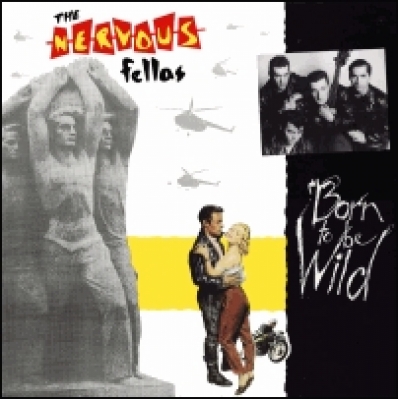 Butch Murphy on vocals, Mark Weldon on guitar (Chris Colt on 'Shake tonight'), Ronny Hayward on bass and Al Black on drums. Ronny Hayward was later replaced by Pete Turland, who had been in The Baskervilles along with Darrel Higham when he lived in England. They were one of the most exciting bands of their day. 'Wild wild baby' is a fantastic slab of rockabilly. The first two tracks are from the 'Boppin' in Canada' compilation and the rest are from an album that they cut for us in 1990.
The Nervous Fellas began in Vancouver around the winter of 1986. The band took its name from the lyrics of a Smiley Lewis song titled "Real Gone Lover". Their set list comprised obscure covers from the Fifties and their own original songs. In the beginning, they started as an opening act for such bands as The Pogues, Tragically Hip, George Thorogood, and Junior Wells, but it wasn't long before they grabbed the main stage themselves. They had several recordings on EastSide Records. Their first self-titled release was produced by Jimmy Roy from the Ray Condo band. It was recorded in Jimmy Roy's living room. Their second studio recording 'Born To Be Wild' was released on the UK label Nervous Records in 1990.

Nervous Fellas - Born to be wild