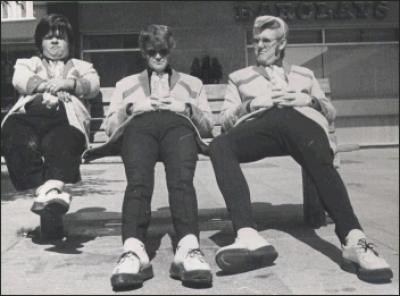 Tilbury brothers Mick and Butch Nash started up a group, The Devils, in 1958 with Mick on guitar and Butch on drums. After a few abortive attempts to find a reliable third member, a dwarf named Peter Mason, known as Mo, became their bass guitarist. They played Essex and London pubs and clubs until they found their forte in 50's rock'n'roll, and became known all across the south-east corner of England. They became known for rock'n'roll, and by the end of the 60's, they got onto the rock'n'roll revival club circuit, run by pseudo-teddy-boys and bikers for followers of 50's rock'n'roll, namely: - The Wild Angels, The Good Earth (later Mungo Jerry) The Rockmobile (later The Houseshakers, then The Hellraisers) Shakin' Stevens & The Sunsets, and The Devils (known by then as The Rockin' Devils).
When Mo left to have a nervous breakdown, he was unsatisfactorily replaced by Chris Catlin, who was sacked for letting the group down in favour of a dirty weekend with a woman of loose morals and elastic to match. Mo returned again, just before which, the band cut its first album, 'Bring Back Rock'n'Roll', produced by Joe Brown at his 'Grange Studio' at Chigwell. The title track was written for the Rockin' Devils by Marty Wilde. Mick founded 'Hot Stuff Records' and pressed 2000 copies to sell on gigs - the first group ever to use this now common method of self promotion, which was a Rockin' Devils invention. They also became cabaret stars on the Manchester and the Northern England cabaret club circuit, topping the bill at Fagins, The Talk of The North, The Northern Variety Club and Bernard Manning's Embassy Club, to name but a few.
Five other successful 'Hot Stuff' albums followed, all privately recorded in Mick's 'Decami Studios'. In 1973, Mick wrote a teddy-boys anthem called 'Teddy-Boy Rock Fan's Broken Romance Blues', a song which found much favour with Teds countrywide, although it was allegedly pinched by American Shel Silverstein, who countrified it as 'Put Another Log On The Fire', although English Teds know where it came from, and by whom it was written. Another favourite was 'A Middle Aged Teddy-Boy's Lament', in which Mick took the piss out of the group's older followers, although no-one seemed to take offence at the good-natured jibe. These two anthems were later released by Orchid Records, a division of Pye, and a similarly tongue-in-cheek bikers' anthem called 'Greaser Grumplin's Chopper' was released on 'Animals' Chas Chandler's Cheapskate label, recorded by Mick as 'Hervie Knervie'. Chas had wanted a name something like Evel Kneivel, hence Hervie Knervie. The Rockin' Devils retired in 1979, on the group's 21st birthday, but a BBC recording of four of Mick's tracks was released on an EP (remember EP's?) in Germany, rocketing up the German charts in 1976, so German fans wanted a Rockin' Devils tour, but Mo had found Jesus and totally retired, and Butch had sadly succumbed to brain cancer and died in 1992, so as Mick had duetted with his daughter Debbie for several years as 'Satan's Sounds', and then played guitar to help out 'Cadillac', he teamed up with Paul Larman and Colin Gilbert of Cadillac (Colin was later sacked in favour of Neil 'Hulk' Hogan), and Debbie as co-vocalist, and they toured Germany as 'Mick The Rockin Devil and his Band', topping the bill at former Beatles haunt The Star Club.
Later, in 1996, Mick suffered a debilitating stroke which paralysed his left side, including his left (guitar) hand, spending six months in hospital, and being forced to retire from the music scene. Thanks to former fans, Paree and Roger Jarvis and their website www.teddyboysreunited.co.uk, Mick was offered a return to the scene by Rockin' Roy (Wild Wax) Williams, owner of Nervous Records, on a new CD (wot's a CD??) of stuff Mick had written and recorded prior to being crocked (Crock 'n' Roll?) plus a few old favourites from the last Rockin' Devils session before Butch died and Mo went to heaven. Mick now returns as 'Mick Satan and the Rockin' Devils' and hopes that the band's former 20th century glory can be repeated in this new millennium.

N.B. All of these tracks originate from analogue sources like vinyl records and some even from cassettes. Thanks to Alan Wilson of Western Star Studios for 'rescuing' as much of the sound as was possible.