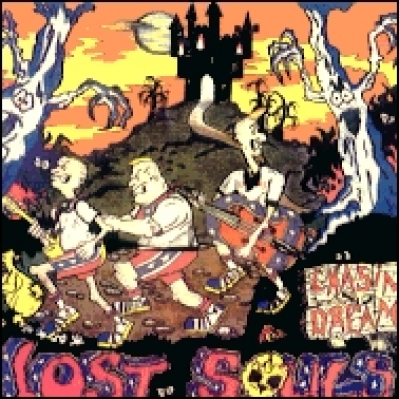 Formed in the late 1980's, the Lost Souls started playing small local venues to enthusiastic crowds, but soon the bright lights of London beckoned. Cramming themselves, their instruments and assorted bods into a hired van, they hurtled down the MI for the first of many London gigs. It was at one of these gigs that they wore spotted by Roy Williams, head honcho at Nervous Records, who knows a good thing when he sees it!
Shortly after that pieces of paper were signed and filed and Roy packed the band and producer (Micky Mutant) off to 'Madhouse Studios' in Luton. With an album in the can, the boys went back to work. Nervous Records released the album in March of 1990, and if was still selling steadilg two years on. In July 1990, The Lost Souls went to Europe for the first time (as a support act to Torment and The Rattlers). Upon their return, they found out that they had impressed several European promoters and are now regular visitors to the Continent. From original press release

The Lost Souls - Chasing a dream