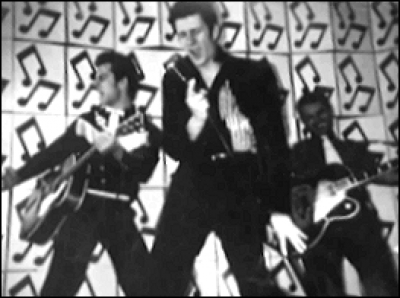 American Rockabilly, from an act also known as 'Kevin Fayte & The Rocket 8'. The first 20 tracks were originally issued on an LP in 1986.

"The thing that impresses me the most about this band is their uncanny ability to write original songs that sound like obscure Rockabilly classics from the 1950's. They have a feel for the music that is truly amazing. These tracks don't cook - they sizzle! So don't just stand there - be prepared to rock your everlovin' socks off!" Rockin' John McDonald WORT

"Not too many bands came in the 80's from America! But that's a problem of distribution I guess?? If you just take two bands each state, you get more than a hundred of them!!! Kevin Fayte is one of them. This record came out on Nervous and Roy Williams is best known for his work and interests for unknown bands from all around the world! Great singer, good band, put your ears to something not so known??" www.bronxnroll.com