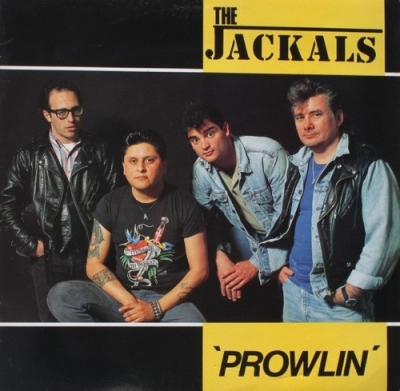 The Jackals 1984 - 1990. Louie Samora, Steve Casmano, Robert Parker and David Corboy made up the members of The Jackals. They recorded two LPs and a compilation LP with the band. The Jackals had an extensive history and carved out a unique place in the history of underground rock. This band was very popular and did many tours. It has been noted that the Jackals are in part responsible for the resurgence of rock-a-billy music during the 80's and early 90's.

The first two tracks here are from their first LP on the 'Anubis' label, and the rest are all tracks that were recorded for Nervous Records in 1988 in Portland, Oregon.

Pictured on the left is the original sleeve from the Nervous LP.

Louie later on formed The Flapjacks. He said that he hadn't wanted yet another 'cat' band, so The Jackals were a 'dog' band.

"I just thrilled how clean these songs sound."C. C. USA