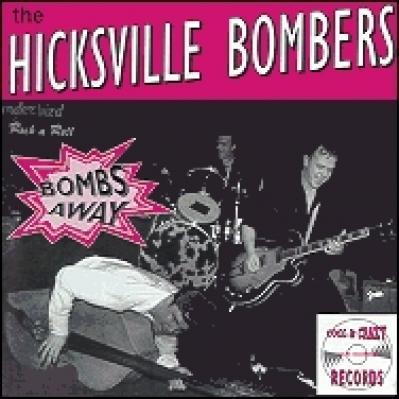 The Hicksville Bombers are a rockin' trio from Lincoln, England, who play rockabilly, rockin' blues, country and rock'n'roll music in a wild and energetic 50's style. Since forming in 1992, they have released two EPs and four CD albums. The Hicksville Bombers have played with a number of bands/musicians including rhythm and blues star Ruth Brown, Charlie Gracie, Lord Sutch, BR5-49, Kieran Kane, Dead Reckoning, Mike Henderson, Jack Scott, The Jets and Matchbox. The Hicksville Bombers have performed at Hemsby Rock'n'Roll Weekenders, country shows, The Americana at Newark and toured Switzerland, Sweden, Norway, Holland, Italy, and New York U.S.A. In 1997, they were booked to support BR5-49 and Carl Perkins (one of the bands' biggest idols). Their first CD was voted most requested CD in December 1996 on a Seattle radio station. As a result of this they were booked to play a festival in Seattle, USA in September 1997. 'Bombs away' was their second CD, originally released on their own 'Cool And Crazy' label..