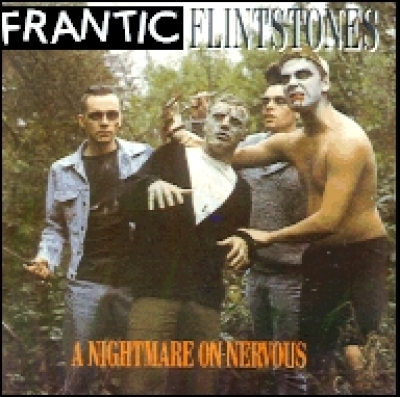 Excellent Neo-Rockabilly from what was later to become one of the most prolific bands in this genre. Gary Day (slap-bass) went on the become Gaz and The Gazmen, and also worked with Morrissey in the USA alongside Boz Boorer (ex Polecats).

"The ever prolific Frantic Flintstones first album featuring several trademark songs. This is one of those records you have to listen to a few times, or I did anyway, before you really dig it. It took me probably a week of just giving it a chance not to suck to realize, this is something special. In my opinion now it is a classic album. Songs like Alley Cat King and What The Hell (on the CD version) show why the Frantic Flintstones are still going. Excellent bass playing by Gary Day, who at least was kept from singing, which is always a bonus in my book. I've heard mixed reactions about their later stuff, but after hearing this, it's at least worth a listen! The only real disappointment on this album isn't really the fault of the band. It is their cover of Old Black Joe, and the only reason it really disappoints me is because Demented did it SOOO much better, but that's neither here nor there. Good album, give it a chance." Josh

"This is the debut full length album from the now infamous Neo-billy/Psychobilly legends The Frantic Flintstones. 17 tracks of some of the finest psychobilly around (my opinion, and hey my opinion is what counts here ok, bucko!). The Frantic Flintstones hailed from England and have been playing their unique brand of Neo-billy/Psychobilly for quite some time now. Some of the stand out, slap bass happy classics are 'Alley Cat King', 'Red Chevy', 'What The Hell', 'Jack The Ripper'... man to be honest, I've loved this entire CD ever since I first heard it. It's that good and it's an essential addition to any collector's collection. Do yourself a favor and get this if you haven't already. You won't be disappointed." Reviewed By The Psycho Avenger 2002 - www.rabreview.com

"This is a first Frantic Flintstones album on legendary Nervous label. I wonder if they titled it after this??? Very successful. Vocalist Chuck Harvey (aka Chuck Flintstone) is on the way to the top here. Gary Day is a very talented double-bassist, and guitar licks are cool on some tracks. Nearly all songs are classics today. 17 tracks of fun and frantic rockabilly." Kirill Jakovlev from Zorch

The Frantic Flintstones - A nightmare on Nervous