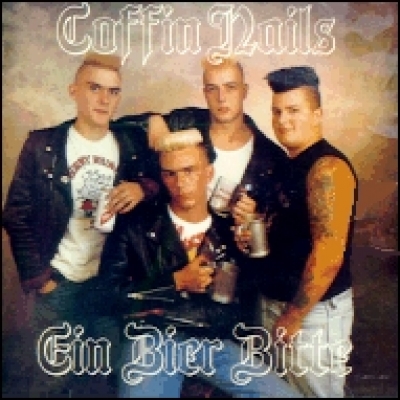 The Coffin Nails, 'Ein Bier Bitte' is the classic first album from this British Psychobilly band. The Coffin Nails are a British act, somewhat like The Meteors (electric bass) with humour. They've been through quite a lot of lineup changes, but Humungus is the soul of the band. In the right light, he looks like a psycho Benny Hill. The Coffin Nails is where the tradition of Victorian Music Hall meets Psychobilly! The title is my own masterpiece of linguistic double-entendre, 'bier' being the German word for bier, and also an old English word for a coffin support/carrier. 'Plymouth Fury' is an older track with the original Coffin Nails lineup.

"This was the first 'Coffin Nails' album, featuring Dave Ward as singer, who since 1988 has been replaced by the Humungus himself. The Coffin Nails were a very good live act in 1987 and their first record is what I call very good, too. One could say, that the sound is a little bit like the Meteors - but I think this is only because the Coffin Nails used an electric bass at that time - like the Meteors did. The sound is very 'heavy' - for eighties Standards - the lyrics sometimes really very funny, the songs offer a variety from slow to fast. In one aspect the Coffin Nails were real forerunners - they combined the skateboard and psychobilly - listen to 'Skateboard frenzy'. Another good one is 'Myra Hindley', a song named after the 'famous' female British child murderer of the sixties. Still one of my favourite psycho-tunes. All in all a super debut album!" mmk