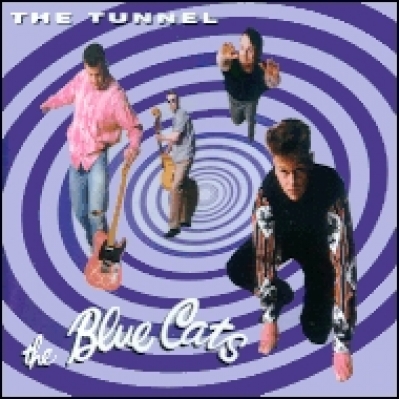 Stunningly brilliant neo-rockabilly from The Blue Cats. State of the art stuff. If you like Neo-Rockabilly, it doesn't get any better! Track 12 is a re-make of a Fifties song that was a very popular club song. The original (and all other covers) pales into insignificance beside this! This was one of our most expensive productions, and it was worth every penny. Shortly after they made this, the Blue Cats toured Japan with Batmobile (what a GREAT tour that was!) and split (again)....

"By the way, you were right: 'The Tunnel' from the Blue Cats is an excellent piece of work! But, actually this came as no surprise as I still remember the kick I got hearing 'Fight Back' from them for the first time (as a teenager)." Frank

"Blue Cats 'The Tunnel' is an absolutely superb album from one of the major bands of the early 80's British Rockabilly explosion." Raucous Records

"Apart from my own CDs and Stray Cats' (I know we probably don't agree here) The Tunnel is the best Neo Rockabilly album I ever heard. It's a lot better than the other stuff I heard by the Blue Cats. Not that it was bad I just couldn't hear what the fuss was about, but The Tunnel is way different. I understand why you wanted to release it." Vince Gordon - The Jime