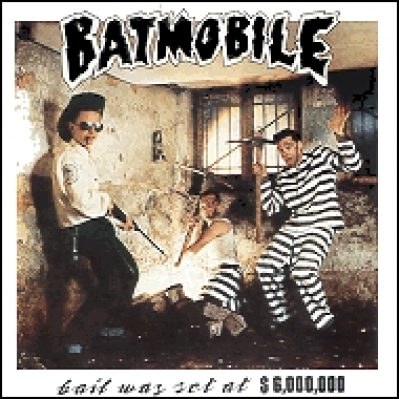 Yeah - this is the Batmobile album with THE Psychobilly version of 'Ace of Spades' on it. It was co-produced by the sax player from 'Golden Earring', famed for their hit 'Radar love'. This album is a bit more 'metal' than their other records, but it still rocks like crazy. Mental screaming vocals, pumpin' slap bass, guitar twanging and screeching, and a unique drumming style, all combine to produce a wild experience. On top of it all, these guys are excellent musicians. For many, this was their finest hour. They were truly one of the best live acts I've ever seen.

"The more I listen to Batmobile, the more I consider them gods. I swear if all their stuff is as good as the records I have, they might just have to jump into my top five favorite bands. This album from 1988 has a lot of the songs that made Batmobile the legends they are now. 'Kiss Me Now', 'Can't Find My Way Back Home', 'Shoot Shoot' etc... It's amazing that you can put all these good songs on one record. The bass line in 'Gorilla Rock' is really really cool. 'Gates Of Heaven' is great, everything is just amazing. And the only cover version of Motorhead's classic 'Ace Of Spades' even worth listening to. All I can say is that I really want to see them do these songs live now, I've heard bad things about the newest CD, but it's never too late to show them the light about their older stuff. I want a t-shirt too. I think that after listening to this CD Batmobile jumps right behind Demented Are Go in my list of favorite psychobilly bands, right up there with Godless Wicked Creeps. Kick ass, if you don't have this CD buy it now." Josh K

"Johnny and me were in the same school in Breda, I was 17 and he was nearly 19 in that time. We were the only rockabilly/rock'n'roll lovers in town, so we didn't have much to choose when it came to playing rockabilly. We're talking about August 1983. So we decided to get together for a little experiment, we listened to some of our mutual heroes (Johnny Burnette, Elvis but also and very much so The Blue Cats) and we thought we have to do that as well. We rehearsed a little and said we're missing something; that 'thing' was the slap-bass. My brother Eric played in several bands in those days and was a 'real musician' (Johnny and I were just irritating good-for-nothing rebels), so Eric joined us and Batmobile was born. By the way, we had a life before Batmobile; we all played in several bands; from punk to rock'n'roll, but the bands never had the feeling that Batmobile had from the start...." Jeroen Haamers